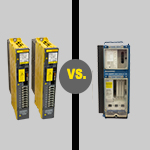 What is the difference between a servo controller & a drive?

What is a controller?

A controller takes signals from different machine monitoring devices (e.g. tachometers, linear scales, encoders, proximity switches, etc.), and the controller figures out mathematically where and how the servo motor needs to move.  The monitoring devices providing are both external to the servo equipment, and some of the devices are part of the servo equipment pieces, such as servo motors have encoders and resolvers built into them and spindle motors have encoders and speed sensors.

The majority of controllers are used for programming offsets, diagnosing, machine status, and part counts.

What is a drive?

In general, a drive takes a signal from a controller; the signal from the controller tells the drive what to compensate for in respect to the servo and/or spindle motor to achieve programming.

A drive can also tell a motor’s status by letting you know if the motor is overheating or if it is being overworked.

END_OF_DOCUMENT_TOKEN_TO_BE_REPLACED

Industrial Monitor Types: What is the difference?

Many terms exist for seemingly similar pieces of servo system equipment: Operator interface, HMI, CRT Monitor, Industrial Computer. So, what do the different terms mean, and which servo component terms have similar or different meanings?

Get updates delivered to your inbox